In case you were curious about my Buddhist corner, here are translations of two of the short ones. 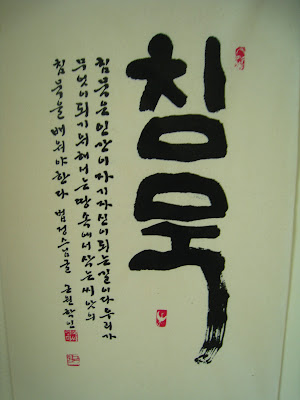 
Putting it naturally: Silence. Silence is the path by which a human becomes himself. In order to become anything at all, we must learn the silence of the seed growing underground.

And the middle one: 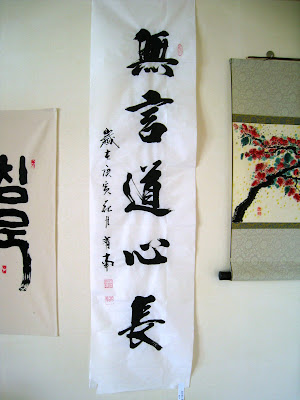 Meaning: Only if you sit quietly and without words will your heart come to understand the Tao.

Ponder that while I go have some cool bean noodles.
Posted by Mike at 21:34 3 comments:

Last weekend I had my old bosses over for dinner. This may have been the first vegan meal they'd ever had. All homemade, by yours truly! 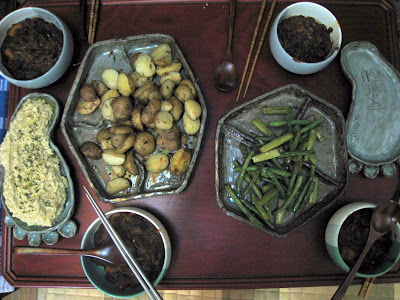 Here are some pictures of my current living arrangements. I'll be gone for almost the entire month of August, so maybe you can keep all my stuff company in spirit?

View from the entrance, through the kitchen, to the living room, with the veranda in back. First door on the right is the bedroom, next is the bathroom. 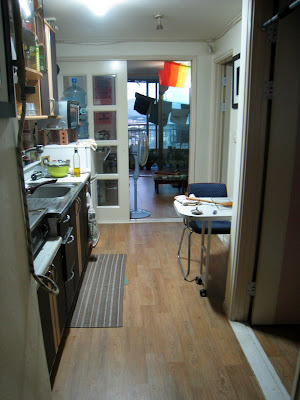 Bedroom, nice and simple. If you send me a postcard (please do!), it'll go on the bamboo thingy there. 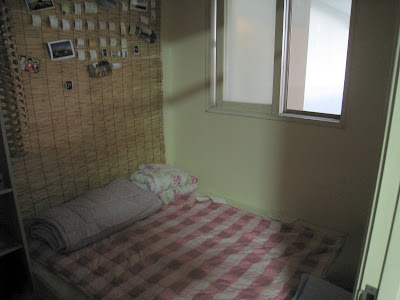 Kitchen from another angle. So much storage space, and an awesome drying rack above the sink! Fake wood cabinet covers applied with some help from the 'rents. 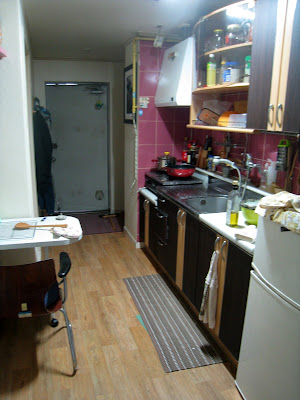 My living room, from the POV of my movie projector. 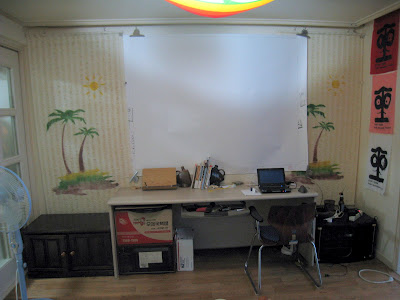 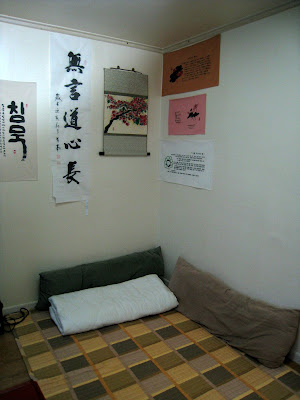 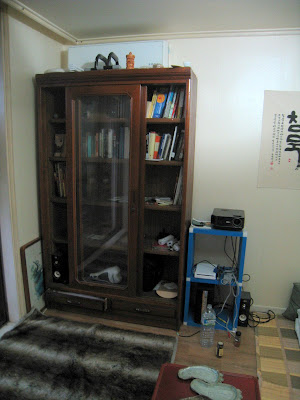 Handmade dishes, ready to be eaten upon: 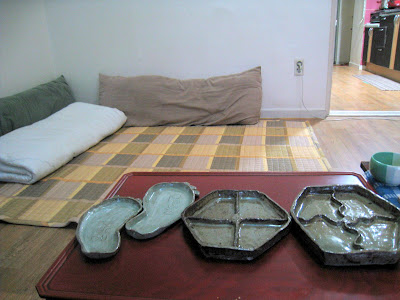 The sun rises from behind the mountains and onto my veranda. It sets outside my front door. I think I'd rather have it the other way around, but oh well. 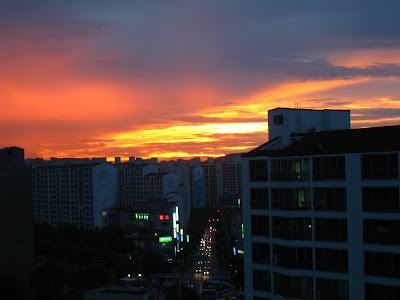 Email ThisBlogThis!Share to TwitterShare to FacebookShare to Pinterest
Labels: Korea

This one came by way of my old buddy Jack at Sadhana Forest. One night, at a group meeting, in front of 100 people or something, another "buddy," Tobin, called me a "lovable curmudgeon" or something. The lexicographer in me got all excited when I noticed a trend - most Americans and Canadians were familiar with the word, but most people from the rest of the English-speaking world weren't. I explained to Jack, who is from London or thereabouts, that he was my brother in curmudgeonry, curmudgeonhood, and curmudgeonosity. A few months later, this showed up in my inbox. It still makes me feel all squirmy inside, despite the fact that M-W defines me as "a crusty, ill-tempered...old man."

HAPPY BELATED BIRTHDAY JACK, who is too busy planting trees and being Vegan and helping at Sadhana Forest's Haiti project to be reading crap like this.

"A curmudgeon's reputation for malevolence is undeserved. They're neither warped nor evil at heart. They don't hate mankind, just mankind's absurdities. They're just as sensitive and soft-hearted as the next guy, but they hide their vulnerability beneath a crust of misanthropy. They ease the pain by turning hurt into humor. . . . . . They attack maudlinism because it devalues genuine sentiment. . . . . . Nature, having failed to equip them with a servicable denial mechanism, has endowed them with astute perception and sly wit.

"Curmudgeons are mockers and debunkers whose bitterness is a symptom rather than a disease. They can't compromise their standards and can't manage the suspension of disbelief necessary for feigned cheerfulness. Their awareness is a curse.

"Perhaps curmudgeons have gotten a bad rap in the same way that the messenger is blamed for the message: They have the temerity to comment on the human condition without apology. They not only refuse to applaud mediocrity, they howl it down with morose glee. Their versions of the truth unsettle us, and we hold it against them, even though they soften it with humor.