The more you (I) think about it, the less useful our vernacular terminology for classifying plants becomes. Everyone has had an argument at some point about the fruit-ness or vegetable-hood of cucumbers and tomatoes. What's the defining characteristic? Growing on trees? The seeds? The sweetness? Being able to eat them raw?

And why are peanuts, which grow underground, and chestnuts, which fall off of trees inside little spiny balls, both "nuts"? We all have been told that peanuts are legumes, but what do they have in common with peas? And how are a peas different from green beans? Which part of the green bean is the bean? And, most importantly, what in God's good name is a cashew, which looks like a tree-gourd turd?

What's the difference between a sesame seed and a grain of corn and a pine nut?

Does anyone else think of Ginko as an herb? Did you know Ginko nuts fall off Ginko trees exactly like acorns from oaks? Why did I capitalize "Ginko" but not "oak"?

Carrots are vegetables, we all agree, but what about potatoes? Aren't they just starches? Ginger is doubtless a spice. Why am I uncomfortable calling 더덕 (Codonopsis lanceolata) and 도라지 (Platycodon grandiflorum) vegetables, when they need to be dug up from underground just the same as carrots?

All of this is my way of saying that I have no idea what category Lotus Root fits into. How about I shut up and show you how to turn the light, crisp unclassifiable root flesh into a sweet, oily, candied side dish? 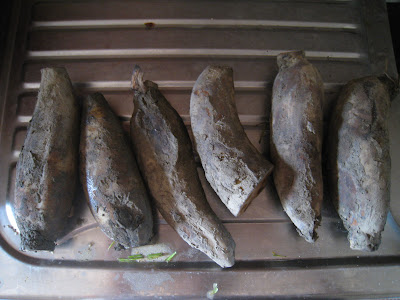 1) Head to "Lightning Market" by the train station, buy a basket of these suckers for less than two dollars, and assure the grandma that even though you're white you know exactly what to do. 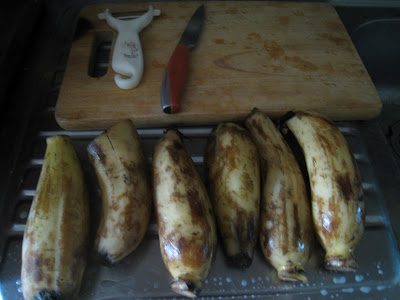 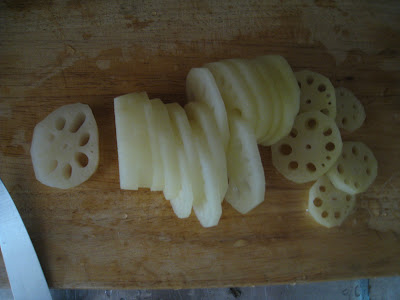 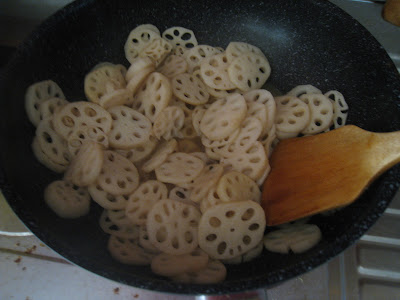 4) Boil for a bit in water with a little bit of vinegar. Drain, then fry for a minute in sesame oil. Then add soy sauce, rice syrup (the traditional Korean equivalent of honey or corn syrup), and brown sugar. 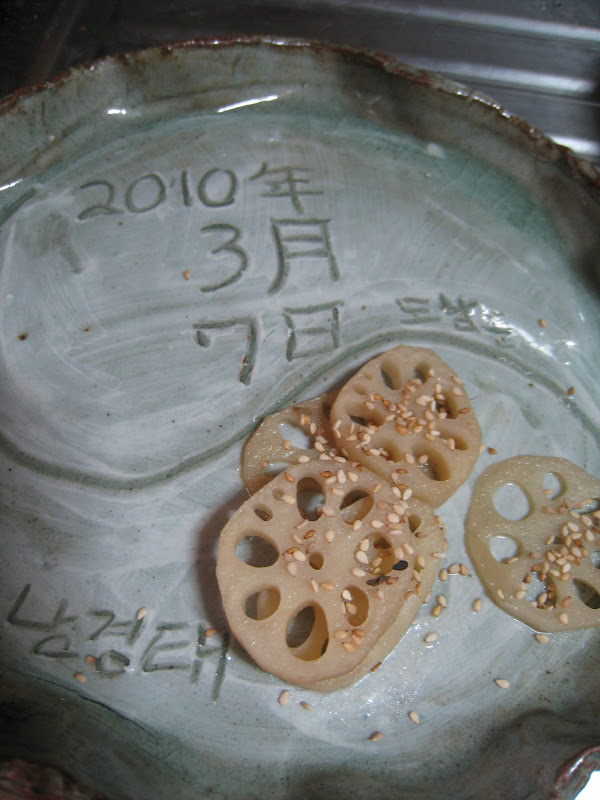 5) Sprinkle with roasted sesame seeds and serve as a side, preferably on a dish you made on 7 March 2010.

*Admission: Real lotus root side dishes come out with a thick, sweet gravy. Really candied. I guess I didn't throw in enough sugar and syrup. But I'd like to pretend that they came out like this because I wanted a healthier variety.

**While researching this post, I learned the rather unsurprising fact, which I assume I already knew implicitly, that, actually, all plants have roots, stems, leaves, flowers, fruits, and seeds. All nuts, cereals, seeds and beans/legumes are apparently varieties of "Seed". I suppose that things that we call "fruit" generally belong to the "Fruit" category, and that things which we call vegetables could belong to just about any category other than "Seed." Our layman's terminology is largely based on synechdoche. When we say "this is a cucumber," we mean "this is the fruit of the cucumber plant," and when we say "this is a potato," we mean "this is the root of a potato plant." And yet, we can't call a sunflower seed by the name "sunflower."

***Interestingly, in Korea, where they sometimes eat multiple parts of the same plant, one part gets priority. For instance, much as in English, the word for "sweet potato" refers to the root, and you need to add the word "stem" if you want to talk about the awesome stir-fried sweet potato stem side dish that I tried for the first time a few weeks ago. "Pumpkin" refers to the big orange or green thing, and you need to add another word to talk about pumpkin seeds or pumpkin leaves. But couldn't the word "pumpkin" just as easily refer to the leaf, in the same way that "lettuce" does, so that you'd have to buy some "pumpkin fruit" or "pumpkin gourd" if you wanted to make a pie? This may or may not raise some interesting issues in the philosophy of nomenclature. I hope they keep you up at night.
Posted by Mike at 20:50 1 comment:

Here's a recipe for one of my favorite Korean foods, 콩국수, ie Kong guksu, ie cold noodles in a broth made of boiled, dried, and powdered beans. 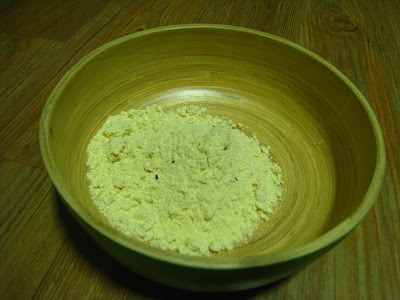 1) Obtain bean powder from middle-aged lady friend's mother who lives in the countryside and is in her 60s but still runs an organic farm and makes her own kimchi etc. Place in bowl. 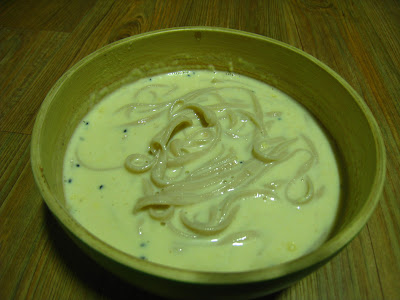 2) Add water slowly until broth reaches desired consistency. Not too much, as the nutty taste is paramount. Then boil noodles, drain, and rinse under cold water.

3) Add in your choice of fresh or cooked vegetables. Boiled green pumpkin, steam sweet pumpkin, cucumber spears and sliced tomatoes all work well. Also, some ice. This is, after all, a seasonal dish, a summer specialty. 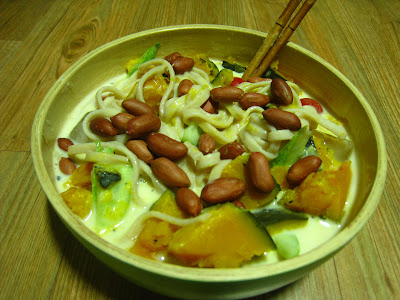 4) For some extra fat and protein, drop in some peanuts. Crush, if you're so inclined. 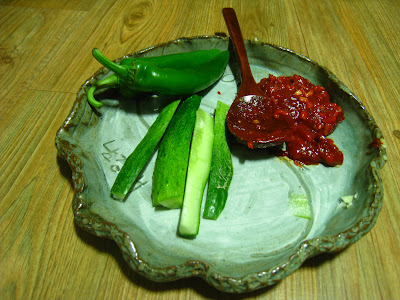 5) To counter the rich and fatty flavor of beans, nuts, and noodles, a nice side of cool vegetables (cucumbers, cucumber-peppers [not very spicy, but crisp and tasty), and carrots are all good choices) and a salty dipping sauce made of soybean paste, red pepper paste, minced garlic, sesame oil, and perahps a drop of soysauce.

Back in the spring, I rode my bike over to the "Green Households" shop to buy some locally-made soap, dishwashing liquid, laundry detergent, and organic noodles. As I have a habit of wearing my helmet while shopping, the ladies and I struck up a little conversation about biking around; it turns out that building is kind of a hub of environmental advocacy in Daegu, housing a sort of global warming museum in the basement, an organic market and a soap-making shop on the first floor, and the Daegu eco-feminist league and some organization that works on bringing local produce to school lunches on the upper floors. Also, it's the headquarters of "ECOBIKE."

ECOBIKE organizes big bike rides every month. Hundreds of cyclicsts all gather at some starting point, with their fancy helmets and silly clothes and sweet wheelz, and then, with a police escort, ride 20 or 30km around town, chatting and showing off and scorning cars and burning pedestrians. Then, at the end, they have a raffle and give away free bicycles, wheels, mp3 players, and other stuff. Here are some photos! 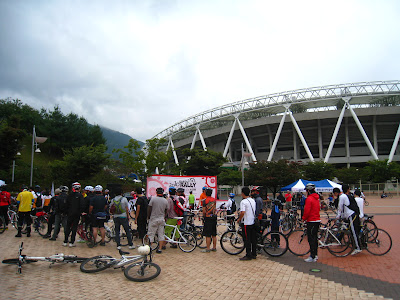 Everyone getting signed in at World Cup Stadium 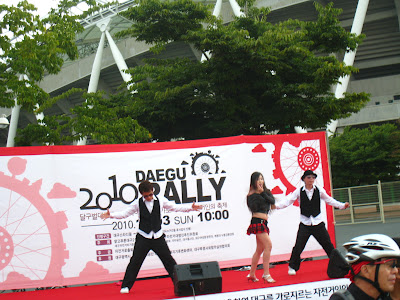 No better way to begin a bike rally than a little K-Pop and break dancing! 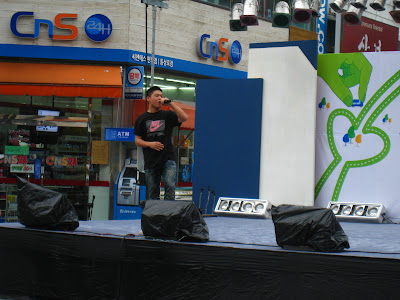 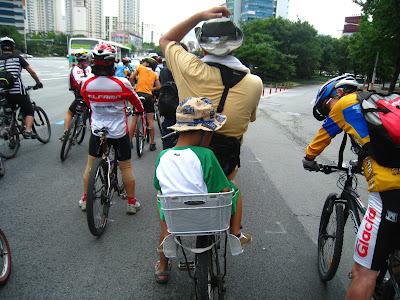 A family-friendly event! Actually, you can see lots of snazzy bikes, including giant unicycles, units with tiny wheels, baby seats in front, or luxury reclining tricycles. 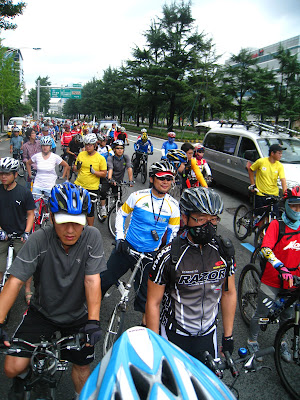 That's my helmet in the front. Mr. "Razor" doesn't look too happy to be in my photo.

All in all, I think this bike event is a wonderful thing. It's really not so hard to bike the 25km from one end of Daegu to another, and actually, if you have to go through downtown, biking is much faster than taking the bus and probably less frustrating than driving a car. Not to mention that it's better for you, for others, and for the planet. It feels good to try to show this to others. I like to see the look on people's faces when they see a bunch of cyclists buzzing around; usually it's kind of perplexed, occasionally a little scornful, but maybe a few onlookers will find the whole thing sort of snazzy and will decide to join next time.

For all that, though, and as much as I hate to end by complaining, I can't help it. For me, bicycling is a lot of things. It's exercise, obviously. It's convenience. It's an antidote to laziness. It's keeping myself in the fresh air rather than inside of a musty, crowded bus. But it's also a way of distancing myself, physically and psychologically, from fossil fuels, from continued spending, from debt, from conspicuous consumption of status symbols, and, last but not least from annoying pop music blaring from every speaker in every bus, cosmetic shop, and phone store.

While I'm aware that every cyclist cycles for his own reasons, it's really disappointing me to have my anti-consumption drive thwarted by people who collect bicycles (isn't one good one enough?) and by others who buy hundred-dollar sweat-wicking bicyle gear with names of bike celebrities they've never heard of and silly company logos all over (I ride around in 6-year old boxer shorts, 10-year old tennis shorts, and a 3 dollar shirt from the thrift store). There are others who, believe it or not, buy speakers and attach them to their bikes, so that even in the middle of the road, in the middle of a crowd of 100 cyclists, my ears are invaded by this crap. And then, of course, the performances before and after the events! Dancers all hussied up, doing the same dances you see on music videos to the same songs you hear at every street corner and in every club, communicating the same messages about the importance of looking rich and sexy and acting like a bit of a badass, despite actually being more or less in line with the mainstream.
Would the bike event really be any less exciting if there weren't rappers and break-dancers and cheerleaders to rile us up before and after? Would the ride be any less comfortable if you spent less than a day's paycheck on each item of clothing? And would the ride be less enjoyable if you could hear the sounds of your gears clicking and your clothes flapping? Maybe I am overanalyzing and expecting a little too much out of people, or expecting people to be more similar to me than is reasonable. I know I am host to all of these tendencies. Nonetheless, it's disappointing to see that something like cycling, which I perceive as relatively "pure," as an activity that doesn't depend very much on a superficial, consumptive, exploitative, pollutatory* economy, can be taken advantage of every bit as much as, say, music or clothing or sport or romance.

I saw one girl's bike. In a way that is very typical (forgive the oxymoron) of Korean decoration, it had a little bit of English on it, simple and cute and a little awkward:

I once again wrote an introduction that was far too long and just about ruined the post. Now it's a footnote. Read this!

That said, I just watched a pretty good one, in which Tim Jackson, an Economist from somewhere around England, talks for 20 or so minutes about our lifestyles, economy, environment, and future. Vague description, I know. Here's the official blurb:

"As the world faces recession, climate change, inequity and more, Tim Jackson delivers a piercing challenge to established economic principles, explaining how we might stop feeding the crises and start investing in our future."

The whole speech is good and worth listening to, though I'm not sure if it's any better than going out and playing in your garden for twenty minutes. If you did that, though, you'd miss the following zinger, which he lets fly while discussing the functions of conspicuous consumption:

**Interestingly enough, Jackson also appears to share my skepticism about video media. Why don't people do many of the "blindingly easy things" we could to help the envirnoment, he asks?

We're too busy "putting the kids on the bus in the morning, getting ourselves to work on time, surviving email overload and shop floor politics, foraging for groceries, throwing together meals, escaping for a couple of precious hours in the evening into prime-time TV or TED online..."
Posted by Mike at 04:04 No comments: