On the Farm Again: Shared Harvest

If you have been following the Mike Map above, you may have noticed that though Mingyu and I arrived in Beijing more than fifteen days ago we have yet to escape its clutches.  First it was Mingyu’s visa stuff, which took about a week.  Then it was a couple days of me waiting on a package (long story that’s too traumatic to get into).  Now, finally, after a month of wandering both list- and aimless, we finally found exactly what we were looking for: AN ORGANIC FARM!

It’s called Shared Harvest and we found it through a series of events that was truly random, though perhaps no more so than every other piece of good luck that has sprung up in our path thus far.

1) A Couchsurfing host rejects my couch request but clues me in to the existence of a Beijing Organic Farmers’ Market held on the weekends .

3)      Protests outside the Japanese embassy lead to the cancellation of the BOFM on the second Saturday.

4)      Mingyu and I wind up going on the second Sunday.  We meet Lynn, who speaks excellent English, is tabling for Shared Harvest, and started volunteering at the farm just a few days prior.  (Thus the importance of my forgetting in (2)).

So, we got her phone number and made tentative plans for “sometime next week.”  Then Mingyu and I went home and delicately badgered the farm people until they agreed to let us come the next evening.  A short* 40km ride the next evening  and here we are!

Shared Harvest is the largest CSA in Beijing (and in China), with over one hundred customers receiving weekly deliveries of hyper-fresh, organic vegetables.  Here’s their blurb:

““Shared Harvest” is a non-profit, service-oriented social enterprise established in 2012 by a group of young people with a strong interest in promoting ecological agriculture and sustainable lifestyles. To address increasingly serious food safety problems, we advocate four principles of organic agriculture: ecology, health, fairness, and care. These principles guide the management and practices of our CSA. We advocate for healthy and natural lifestyles; and we seek to reestablish harmonious rural-urban development and relations of mutual trust across the rural-urban divide.”

Sounds awesome in theory, right?  Here are some pics to show what it’s been like in practice: 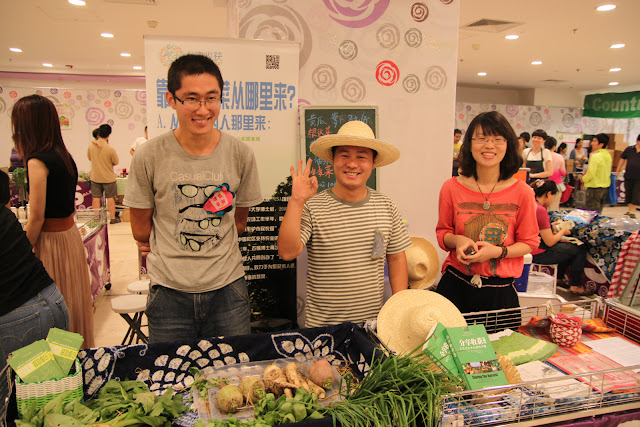 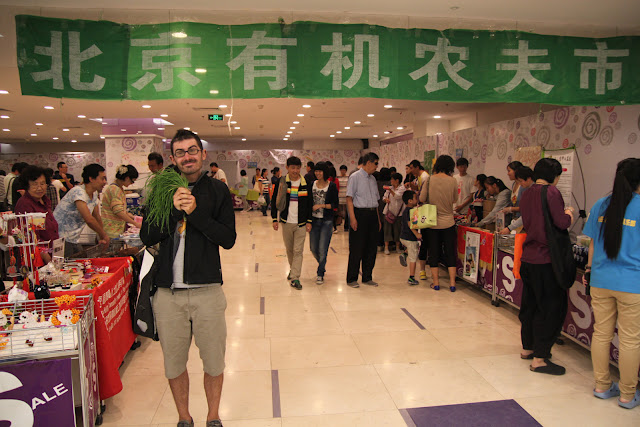 Me and some green onions in sweet embrace. 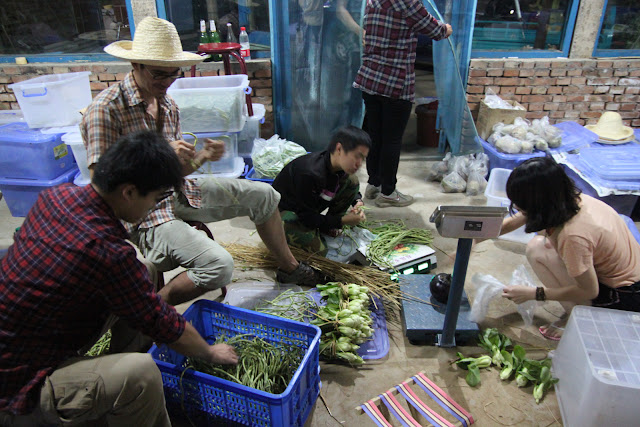 Day 0: getting straight to work on the long beans and Bok Choi.  Notice that they're tied into bundles with rice stalks.  No trash! 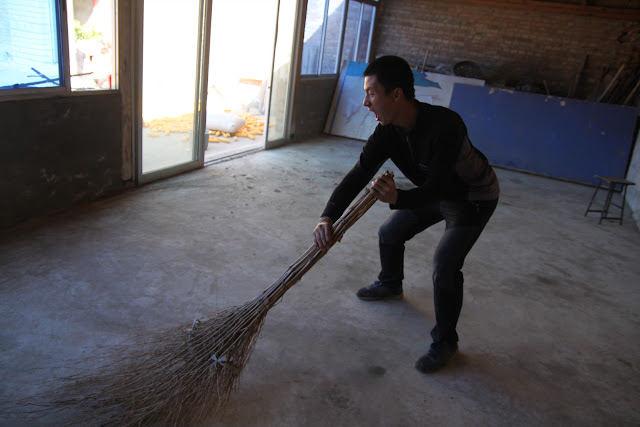 Day 1 (Tuesday): Doing some cleaning at the farmer's house.  We're expecting 25 students from Beijing International School to come for a little farm lesson on Wednesday, so we cleaned out this shed and set up some tables for a DUMPLING PARTY. 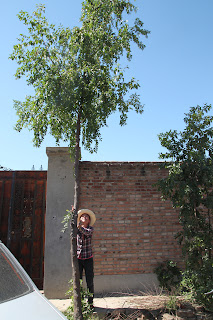 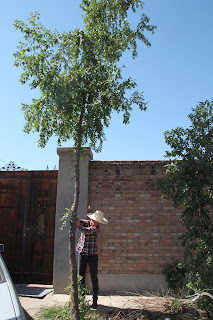 On the way back to our home base, one of the workers, Shaoting (Xiaoting?) stops to show us a Jujube tree.  A couple shakes later we all have handfuls tiny delicious jujubes. 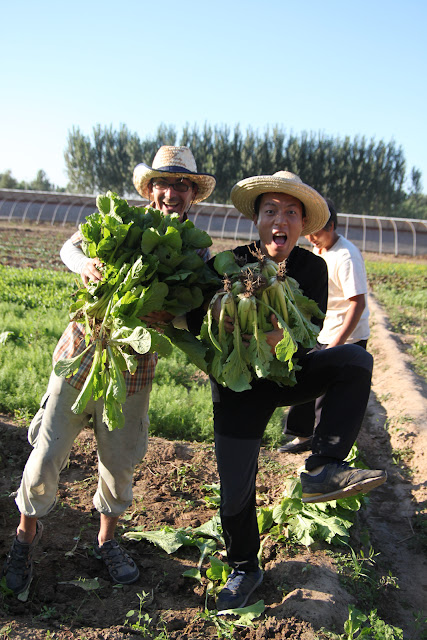 Then over to the farm to help the hired hands - all extremely friendly, smiley 50- or 60-something ladies - do a little picking and plucking.  They compliment the way I tie knots with the rice stalks and are surprised that the old "thumbs up" means the same thing in the USA.  I always assumed we had invented it... 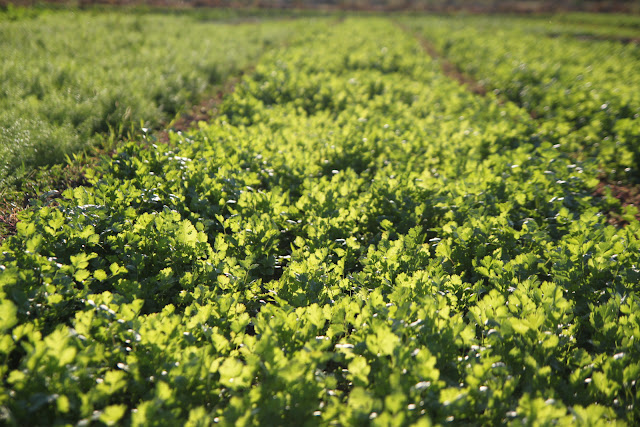 THIS IS ALL CILANTRO.  HOOOOOOOLLLLLLLY CRAP. 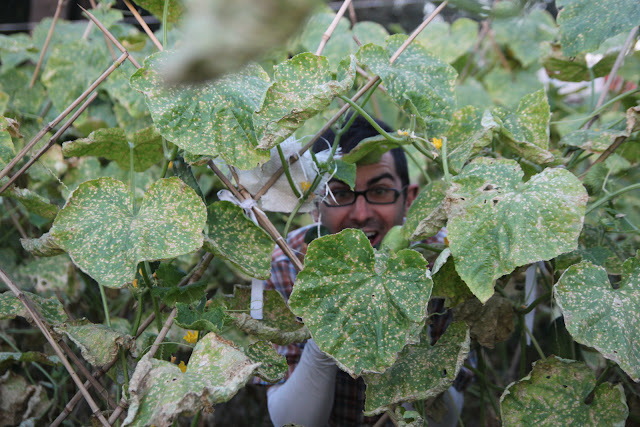 Peekaboo amonsgt the cucumber vines.  Or maybe long beans.  They're all hung on a very cool bamboo lattice, so, again, no metal, no plastic, no trash.  Only a few knots in certain strategic places. 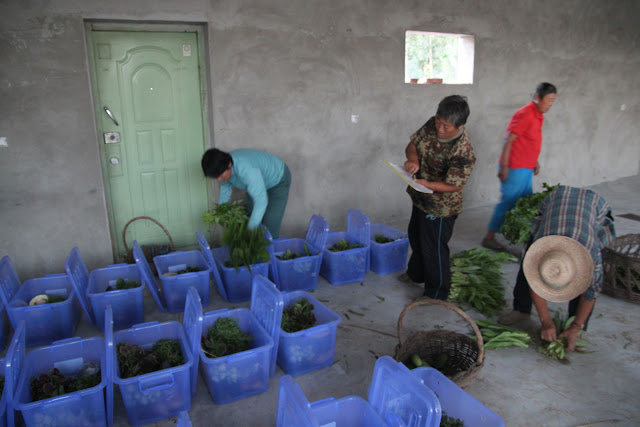 Helping the crew get the deliveries prepped. When I said “hyper-fresh” before, it wasn't an overstatement.  Many of the vegetables are picked and packed on the same day, and then trucked the short 50km to Beijing early the next morning, meaning that customers get their vegetables within 24 hours of their** having come off the vine or out of the dirt.  The only way to get them fresher would be to a) grow them yourself, or b) live in the village and pay a fee for access 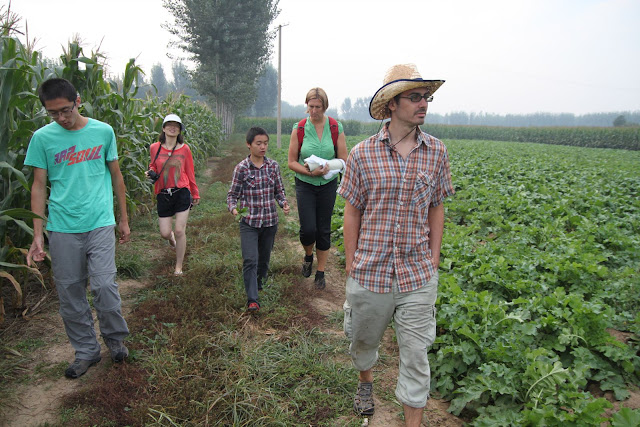 Day 2)  Giving a pre-field trip tour to one of the staff coordinating the Beijing Int'l School (BISS) trip. 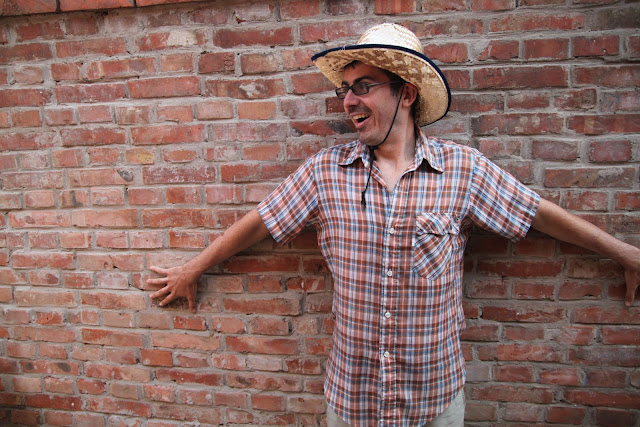 I knew somewhere in the world there was something that matched this shirt. 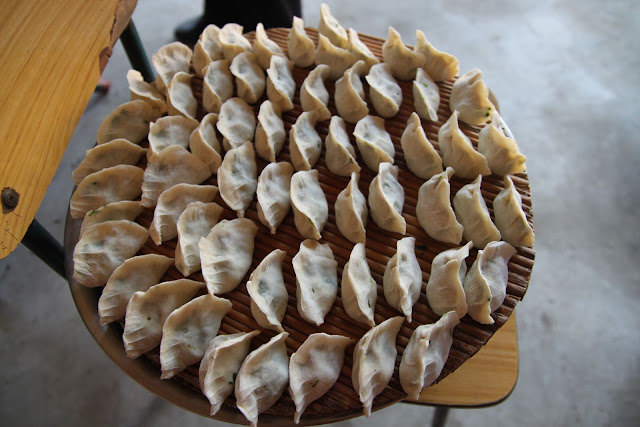 The plan was to make dumplings with the kids, but it's pretty intensive, so the farmer's wife made most of them ahead of time. 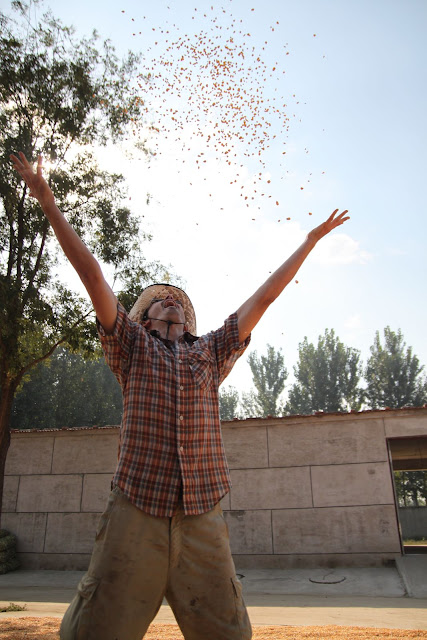 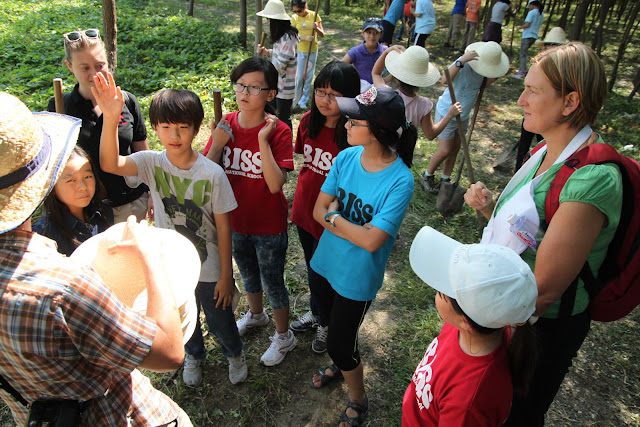 Unfortunately, the bus took the kids to Little Donkey Farm, another organic farm 40km NW of Beijing, rather than Shared Harvest (ours), 40km SE.  Luckily the people at LDF are all friends with the SH people and they covered for us while we popped in the car and scrambled over. 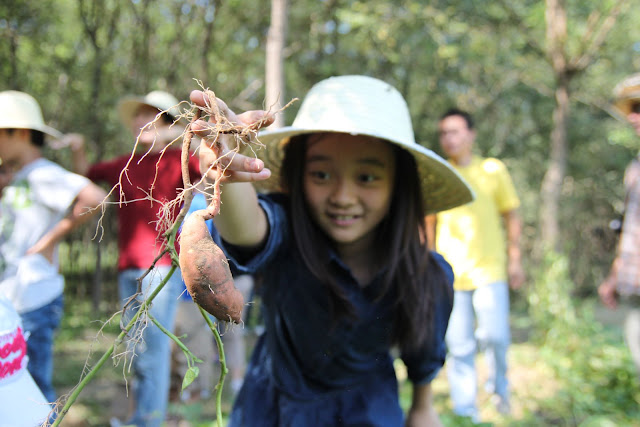 The kids didn't know the difference, though, and had an awesome time digging for sweet potatoes. 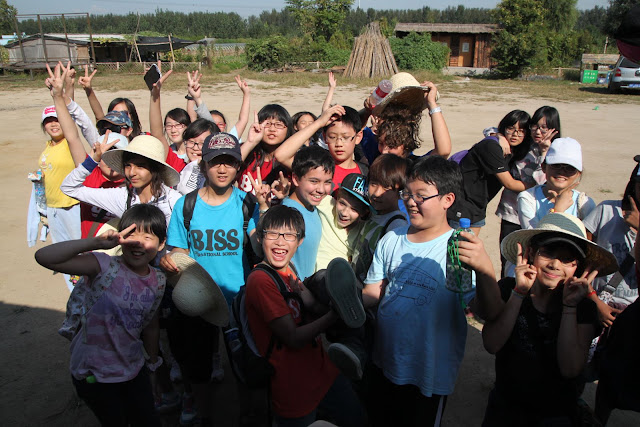 Unfortunately the transit SNAFU meant that we had to cancel our wild foraging activities and dumpling making. 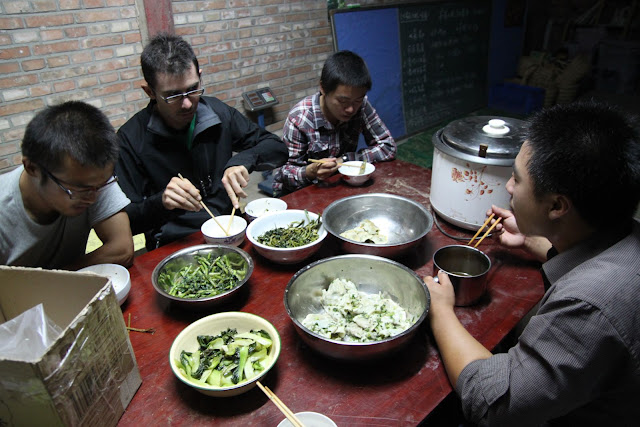 Which wasn't so bad, since it meant that back at the ranch we got to enjoy the leftovers. 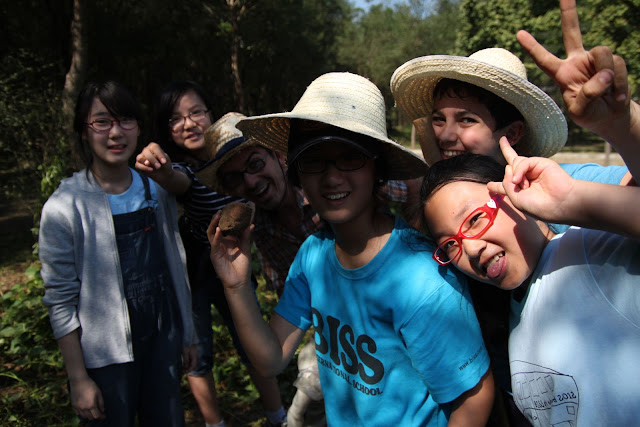 Oh, yeah, and a good 30-40% of the BISS kids were Korean.  I had a great time screwing with their heads by repeatedly speaking Korean to them and then disavowing all knowledge of the language.  Then I convinced them that I was Korean and Mingyu was from the Phillipines!  It really was a blast chatting with them.  There was also one Italian boy.  I tried to talk to him but  got totally tongue-tied. 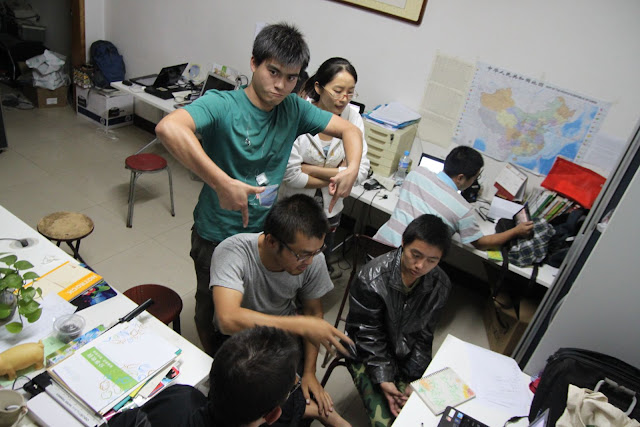 Hanging out in the office.  Actually, Mingyu and I haven't been spending much time doing farmwork, since the lady crew has that all covered.  Instead we've been helping out the office staff, who are more in charge of strategy, distribution, advertising, and that sort of stuff.  Also, we've been eating.  A lot. 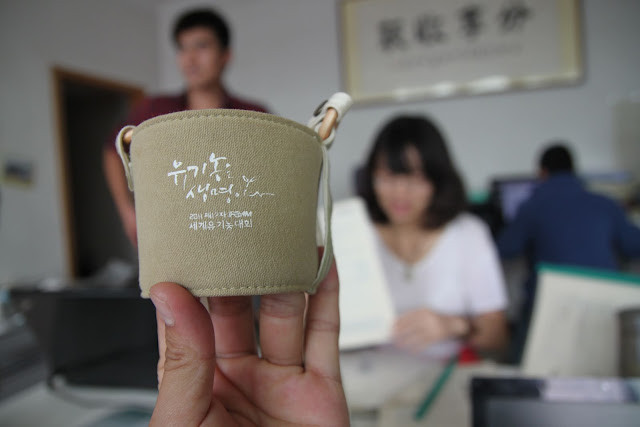 In the office, we found this knick-knack from the 2011 Organic World Congress in Seoul.  Mingyu was there with his company (Heuksalim/ Soil Savers) and I was there on my own just bumming around, as I do.  It turns out that the founder of Shared Harvest was there too, and actually gave a presentation on the developing Chinese CSA scene. 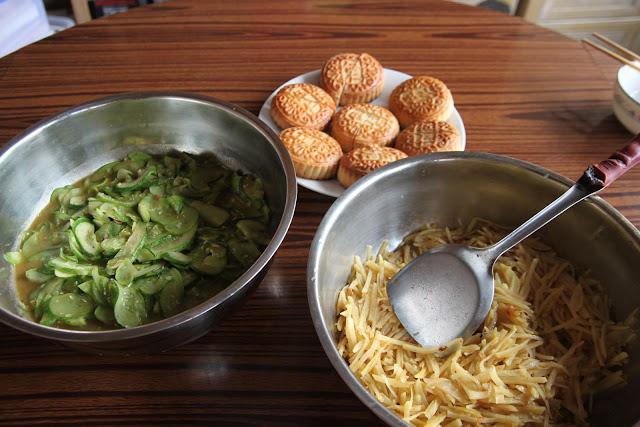 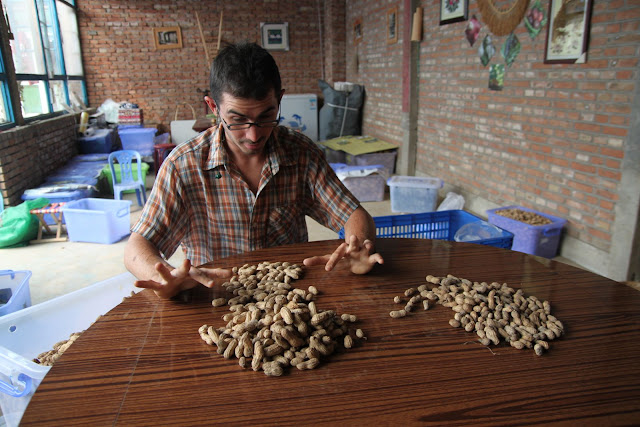 One of today's tasks: sorting out the good and the bad peanuts. 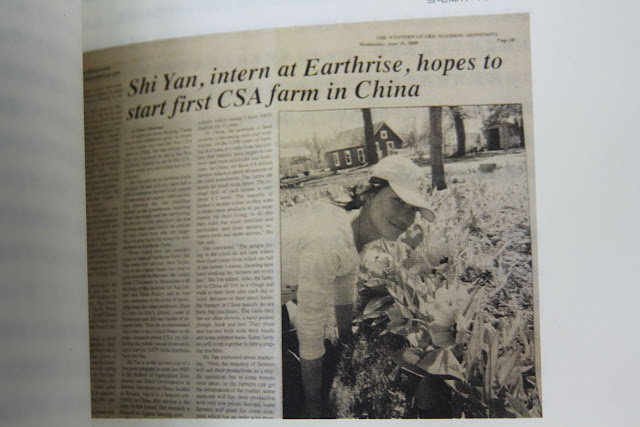 Using basil from the front yard, tomatoes from the garden, and sheep cheese gifted to one of the workers by one of his friends from Inner Mongolia, I turned the standard morning bread recipe into morning pizza.  Hurrah! 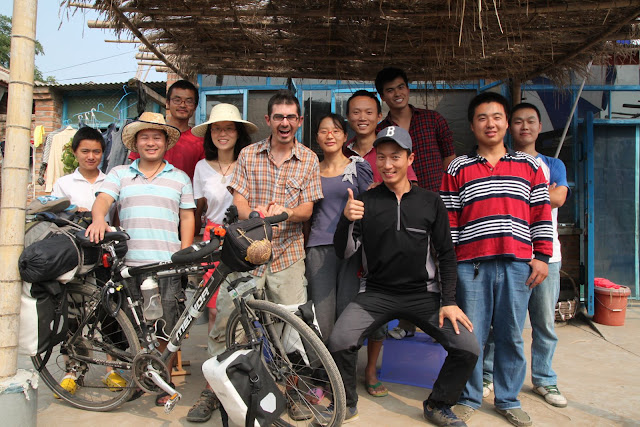 The gang!  The gosh-darn mohawk part has yet to sort itself out, apparently...

For more about Shared Harvest, check out their official site.  They have some awesome sections about the history and philosophy of CSAs.

*Whereas I used to consider rides of 10-15 kilometers long, and certainly “longer than any other foreigner in Daegu is willing to ride in order to do a private lesson at a rock-bottom rate,” I now regard anything less than 60km as a pre-lunch stroll.  100km, which used to seem inconceivable, is “a good day’s work.”  280km is “the general anticipated distance between real showers.”  500km is still “are we out of our minds?” territory.

**(The vegetables, not the customers, of course.)